My baby… The first “good” ride I ever bought, and the one that taught me all about what ride cymbals could be.

Somewhere between a dry ride and a big crash, the 20″ K Custom Dark Ride has crisp stick definition on top, and a big, washy sound if you get it moving from the edge.

It sounds ridiculous, but for the longest time, I barely played a ride cymbal…

My first kit, several owners deep, came with a Z Custom Heavy Power Ride – a behemoth of a pie that was more like a Spartan shield than a musical instrument. Don’t get me wrong, cymbals of that, uh, “persuasion” have their place, but for a young drummer, it had way too much bite. It sat dormant on the far right of my kit, more for looks than anything, I suppose.

It wasn’t until I got this wonderful K that I began to understand how many sounds a ride cymbal could produce.

The one I have is filthy – never been polished (or even cleaned) – and has a pretty mean keyhole, but it’s only gotten warmer over time, more pronounced and playable as a big, dirty crash. 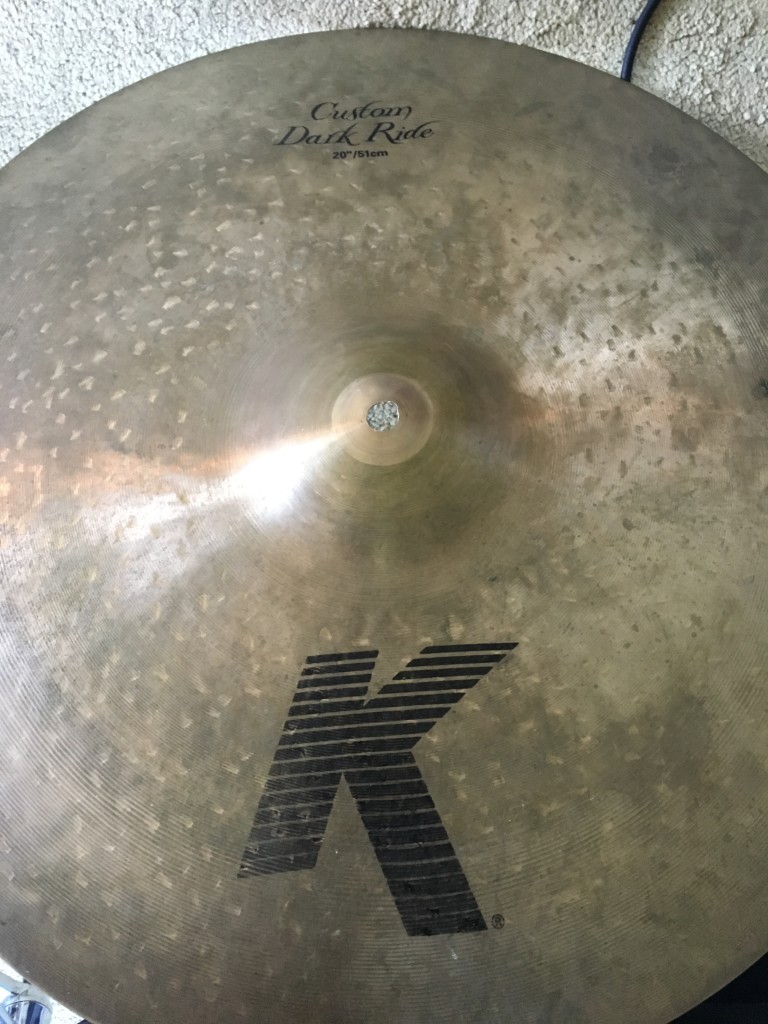 It has become my go-to choice for a range of situations, but not all of them…

Again, versatility. It works beautifully as a crash/ride for big open sections of rock tunes. More wash (and a lower pitch) than most of the crashes in my arsenal, and not so thin that it gets out of control. You can bash the hell out of it without having to adjust your stroke too much to get it reined back in.

It’s a staple of King Crabapple setup because of that exact function, and the bell cuts just enough. Crashing through the chorus:

When you play it quiet, the stick articulation is dry and crisp, with just a hint of wash underneath it – almost like a touch of reverb. This quality – the opposite end of its “crashability” – has made it a great cymbal for musicals, low volume gigs, jams, and some of the quiet blues stuff I ocassionally do with Cosmic Knot. A range of uses here:

I don’t have too many negative things to say about this cymbal, but there are a few situations where it’s just not quite right. For one, it’s not really the best choice for Flexadecibel! With a horn section, and “up” sections that are all 8 of us at full tilt, the stick definition just doesn’t make it through – and the style of music doesn’t always call for the crash-like sounds I may use in other tunes, and when it does… I have crash cymbals.

This extrapolates out to other musical situations as well. This ride wouldn’t do it for speed metal or anything super guitar saturated. It works as a crash, but there isn’t nearly enough “ping” to make a definitive ride sound through that much noise. It simply isn’t built to do that.

This piece is a staple in my collection, and I have a feeling I’ll hang on to it for years and years to come… But like any tool, it has its proper uses.

Do you dig this gear review/overview type stuff? Let me know…